And, Just Like That, Summer Draws to a Close

The days are getting shorter, kids are back in school and, while the heat is still around, the long, lazy days of summer in National City are becoming a memory. With the endless days of summer behind us, the pace is picking up around town and things are on the move. This is a perfect time to read Your National City News to see what is happening now and what is coming up in our city. Enjoy. 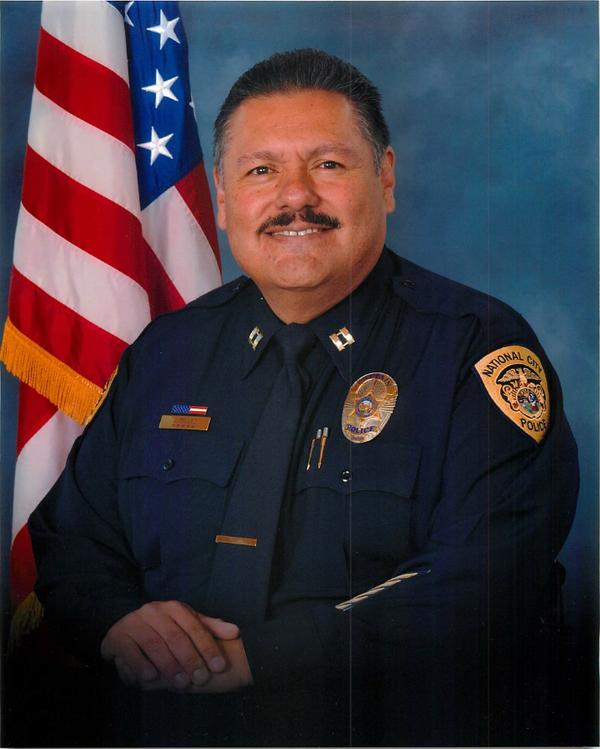 Chief of Police Manuel Rodriguez says “Assistant Chief Tellez has a proven track record of leadership; his ability to build consensus on divisive issues and commitment to our Department’s mission by focusing on providing responsive, effective and positive service contributions will continue to make the National City Police Department a model police agency.“

The addition of the Assistant Chief position allows the Department to implement a succession/leadership plan by leaving the vacated Captain’s position unfilled and allowing lieutenants to serve in an Acting Captain position. In many cases this will allow sergeants and corporals to also serve in acting positions thereby increasing the level of experience and leadership throughout the chain of command.

City Manager Leslie Deese says “I am appreciative of the support our City Council has shown for the succession/leadership program and helping to ensure our City’s pledge to providing the highest level of service and public safety to the community we serve.”

We are thrilled to announce that Paradise Creek affordable development project received the prestigious Ruby Award for “Project of the Year – New Construction” from the San Diego Housing Federation. The Ruby Award recognizes excellence in affordable housing and community development, highlighting the accomplishments of people, agencies and developments that work to ensure all San Diegans, regardless of income, have a safe, stable place they can afford to call home.

The Ruby Award is not the first recognition for this development, it also received a Silver Catalyst Award for California’s Sustainable Strategies Pilot Program and was selected as one of five federal Sustainable Communities Partnership Pilots in the country by the Environmental Protection Agency in partnership with HUD and the Department of Transportation.

For more information on the 2017 Ruby Awards click here.

Help Us Design Your Dream Playground

What’s your dream playground?? We need your help to design & build a new National City playground with the help of Kaboom!

Sign-up to design a playground at Las Palmas Park. 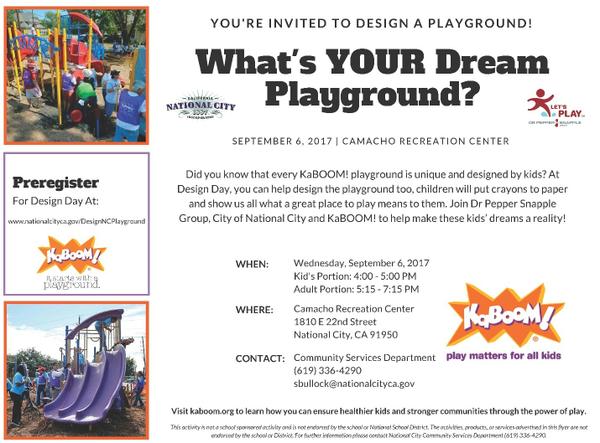 The Government Finance Officers Association (GFOA) has awarded its Certificate of Achievement for Excellence in Financial Reporting to the City of National City for its comprehensive annual financial report (CAFR) for fiscal year 2016. The GFOA has also awarded its Award for Outstanding Achievement in Popular Annual Financial Reporting to the City for its popular annual financial report (PAFR) for fiscal year 2016.

The Certificate of Achievement for Excellence in Financial Reporting is the highest form of recognition in the area of governmental accounting and financial reporting, and its attainment represents a significant accomplishment by a government and its management. In order to receive the award, a governmental unit must publish an easily readable and efficiently organized CAFR that satisfies both generally accepted accounting principles and applicable program requirements.

In order to receive the Award for Outstanding Achievement in Popular Annual Financial Reporting, a governmental unit must publish a PAFR whose contents conform to program standards of creativity, presentation, understandability, and reader appeal.

The awards are valid for a period of one year only. We believe the fiscal year 2017 CAFR and PAFR will continue to meet the GFOA programs’ requirements, and we will submit each of them to the GFOA to determine their eligibility for another award. 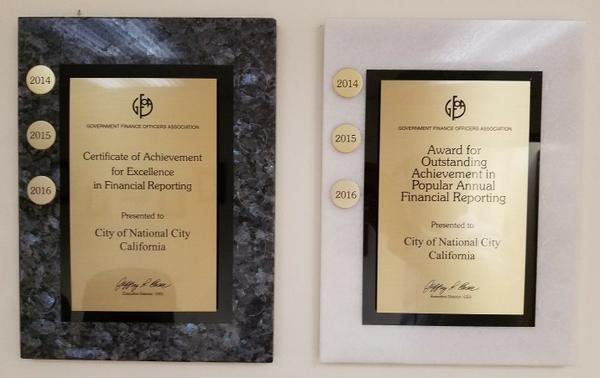 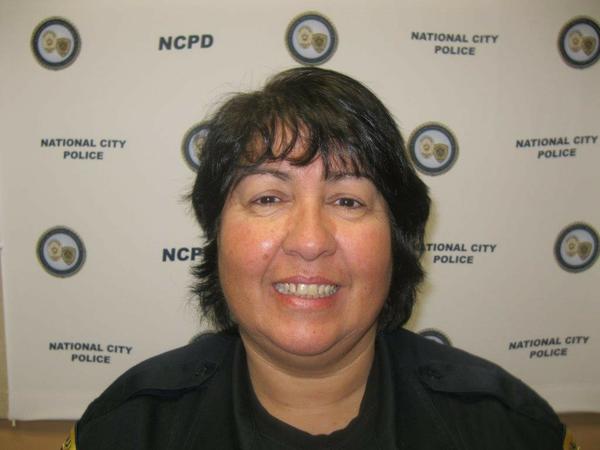 Sergeant Cordero exemplifies the highest principles and standards set forth by the National City Police Department. Her professionalism, integrity and service to the community is exemplary, not only to the police department, but to the entire law enforcement profession.

Sergeant Cordero has been a valuable employee for over 26 years. A San Diego native who began her career as a police officer and who worked her way up to the rank of Sergeant. Sergeant Cordero was the first female officer to be promoted to this rank in the history of National City Police Department and has shown her true talents of being a leader within the organization.

In addition to Patrol, Sergeant Cordero has supervised many of the specialized units on the department to include Communications, Investigations and the Gang Enforcement Team. These specialized units require a true leader with exemplary abilities to train, mentor and coach officers to be the very best that we can be. Sergeant Cordero has exceeded these expectations with overwhelming tenacity, ability and compassion.

This type of officer is what makes National City so special. Employees who care about one another, the department and the community. 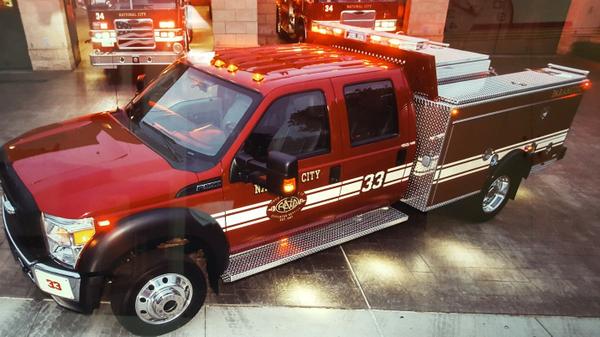 The National City Fire Department will roll out a new squad in order to enhance response capabilities to the residents of National City. The squad will include a medium duty response vehicle housed at a satellite station within El Toyon Park. This unit will be staffed 24 hours a day, 7 days a week, by a 2 person crew. This unit is designed to provide advanced life support, limited fire suppression, incident command, and additional support functions during larger emergencies. The squad will be solely dedicated to National City and not be available for auto-aid responses into other jurisdictions.

Highlights of the program:

Enhance service delivery to the residents of National City

RECREATION PADDLE provides the general public with an opportunity to rent equipment and have a Kayak or Stand-Up Paddle Board (SUP) lesson. We have Single Kayaks, Tandem Kayaks and Stand-Up Paddle Boards. We have Resident and Non Resident pricing. Recreation Paddle is open to the public most Saturdays & Sundays. Reservations are not required but are preferred to make sure there is space available. All equipment is provided. All pricing includes lesson and rental of equipment. 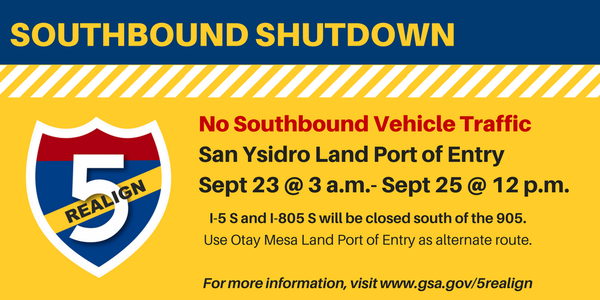 Starting Saturday, September 23, 2017 at 3 a.m. and continuing through 12 p.m. Monday, September 25, all southbound lanes of I-5 and I-805 will be closed to traffic south of the SR-905. Detours will be provided for destinations south of SR-905 (residences, business, etc.), however, vehicular access into Mexico through the San Ysidro Land Port of Entry will be closed. For vehicles wanting to enter Mexico during this time, a detour to the Otay Land Port of Entry will also be in place. Northbound travelers (pedestrian and vehicular) crossing the border from Mexico and southbound pedestrians crossing the border into Mexico will be unaffected.

The closure is being planned by the U.S. General Services Administration as part of its plan to to realign a portion of Interstate 5. Over the course of the 20-month project, the number of southbound vehicle lanes that feed from San Ysidro into Mexico’s El Chaparral Port of Entry will double from five to ten. In addition, eight northbound vehicle inspection lanes will be added to the San Ysidro Port of Entry, bringing the total to 33. Pedestrians will still be able to cross on foot during all phases of construction at the San Ysidro Land Port of Entry.

The City of National City in partnership with the Port of San Diego will be hosting FREE Yoga by the Bay classes on Saturday’s in September. The classes will have a waterfront view and will be held at the National City Aquatic Center and Pepper Park. The yoga classes are open to all ages, all fitness levels, and since yoga is better with friends don’t forget to bring someone along with you. Classes will be held on four different Saturday’s so bring your yoga mat and enjoy the morning practicing your best yoga pose. There will be free giveaways to a limited number of early registrants and also a chance to win an opportunity prize. Register for all four classes or just one. Limited space for classes held inside National City Aquatic Center so register early.

For more information and to register: http://www.nationalcityca.gov/government/community-services/yoga-by-the-bay

For More Information on the National City Aquatic Center and the programs offered that include kayaking, rowing, and stand up paddle boarding on weekends and also youth camps visit www.nationalcityca.gov/ncac or call (619) 336-4290. 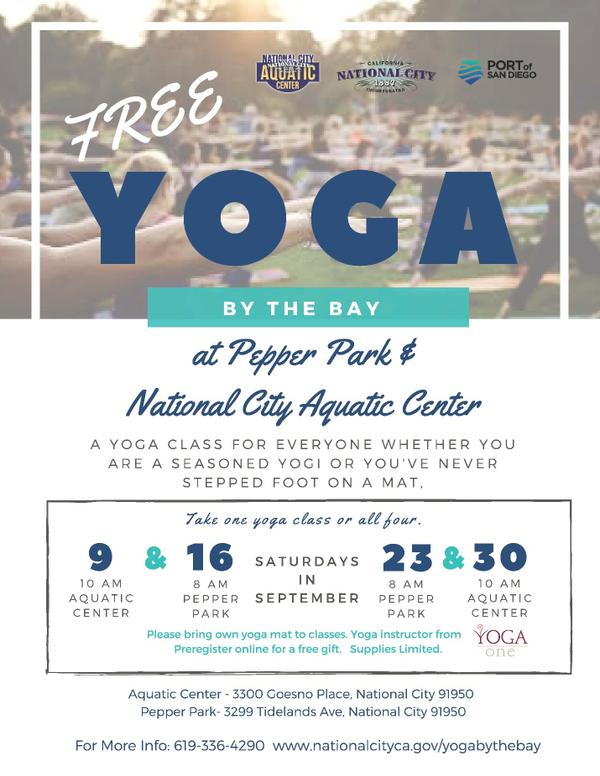 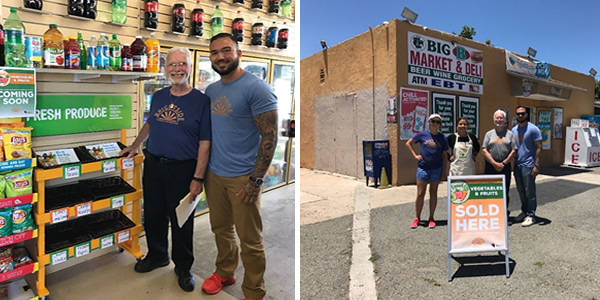 BrightSide Produce (BrightSide) is a student-driven, social venture with a sustainable distribution model designed to eliminate food insecurity in underserved neighborhoods while bridging communities through people and produce. BrightSide provides a service that increases the accessibility, availability, and affordability of fresh fruits and vegetables by serving as a produce distributor that reaches food insecure customers in underserved communities.

BrightSide Produce made its first produce deliveries earlier this month to five stores in National City and plans to grow by one additional store each month. Make sure to visit http://www.brightsideproduce.org/our-stores-1.html for updates a a list of participating stores near you.

Looking for a Fun, Free and Fabulous Family Activity in Your Neighborhood? Summer Movies in the Park is a perfect chance to relax and enjoy a safe and special night under the stars. Come early and get a good seat! Pre-show entertainment begins at 6:00 pm and the movie will begin at 7:15 pm. Food Trucks will be onsite for anyone wanting to grab a snack or dinner before they settle in for the movie. Movies are subject to change.

A cooler-than-ever Bruce Wayne must deal with the usual suspects as they plan to rule Gotham City, while discovering that he has accidentally adopted a teenage orphan who wishes to become his sidekick. 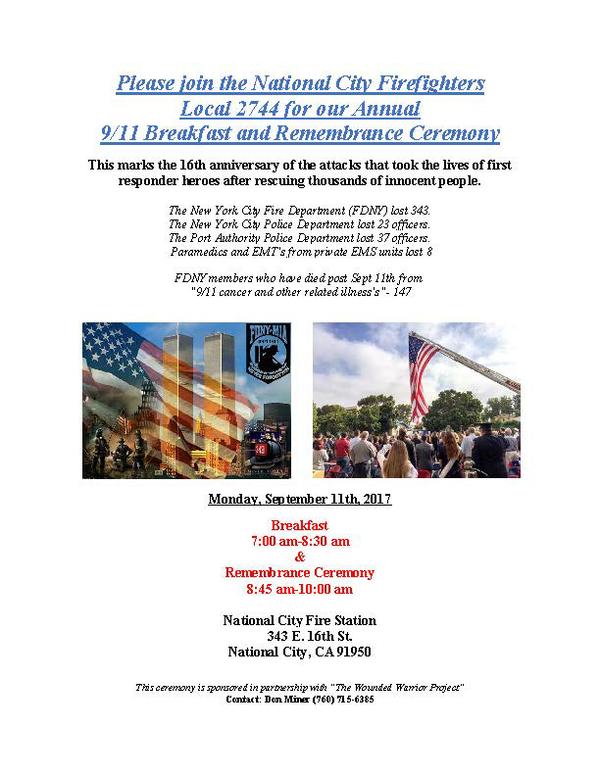 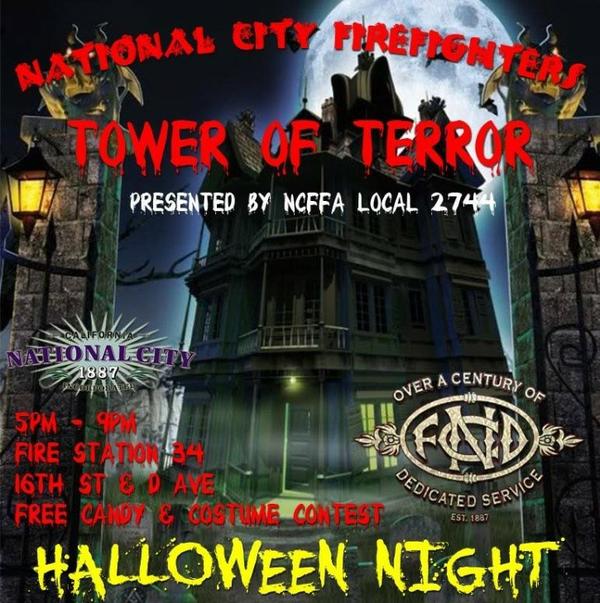 The National City Fire Station training tower will transform into the Tower of Terror to accommodate all the fright seekers in town. Mark your calendars for Halloween Night, dust off your broom, and fly on over to this great event!

Come out and prepare to be scared out of your skin, as your National City off duty firefighters take you on a trip through torture chambers, deadly caves, and all sorts of Halloween mayhem. There will be plenty of candy for all those little ghost and goblins that come in costume along with a costume contest. The Tower of Terror is designed for the residents of National City to have a SAFE place to enjoy FREE Halloween festivities along with a unique opportunity to meet your local public safety employees and much more.