As we enter the holiday season and approach the end of 2015, our thoughts naturally turn to family and community. Thank you for a fantastic year and for being a part of our great city. Once again, National City and it's residents have proven that a city is nothing more than its community and ours is one of the best there is. The residents and friends of National City have made this city one of the best places to live and work in the county. We are truly all one family and look forward to a bright future in the coming year. 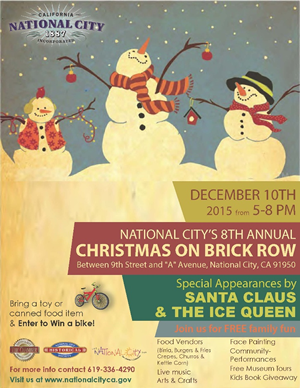 December 10th marks the 8th Annual Christmas on Brick Row. Join us for a host of family-oriented activities including face painting, crafts, community performance, live music and a special appearance from Santa Clause and the Ice Queen. It all happens from 5 p.m. to 8 p.m., December 10 between 9th Street and A Avenue.

City Hall will be closed for two weeks beginning December 21, 2015 thru January 1, 2016 as a cost savings measure. Estimated salary savings will be $163,304 in addition the City will realize approximately $12,000 in energy savings.

During this time essential emergency personnel from the Police and Fire Department will remain in operation to include animal control, graffiti abatement, and parking enforcement. The City will have standby and on-call personnel from Public Works, Fire Investigations, and executives and managers from each department.

During the two week closure the Senior Nutrition Center dining room and home-delivered meals will not be affected. Park maintenance will continue. The City Hall Finance Department drop box will be available to make payments. Library materials will not be due during this time and fines will not accrue.

This will be the seventh year of the closure. “The two week closure represents the partnership between the City and its employees. The program results in cost savings to the city while allowing employees to have quality family time during the holidays”, said City Manager Leslie Deese. The two week period crossing December and January was selected because it is historically a slow business period. Representatives from all departments will be available to address emergencies.

The City of National City is preparing for the forecasted El Niño season. El Niño is a tropical weather condition that is characterized by unusually warm water temperatures in the Pacific Ocean. This area of warm water means the possibility of heavy rains and localized flooding during fall, winter, and spring. 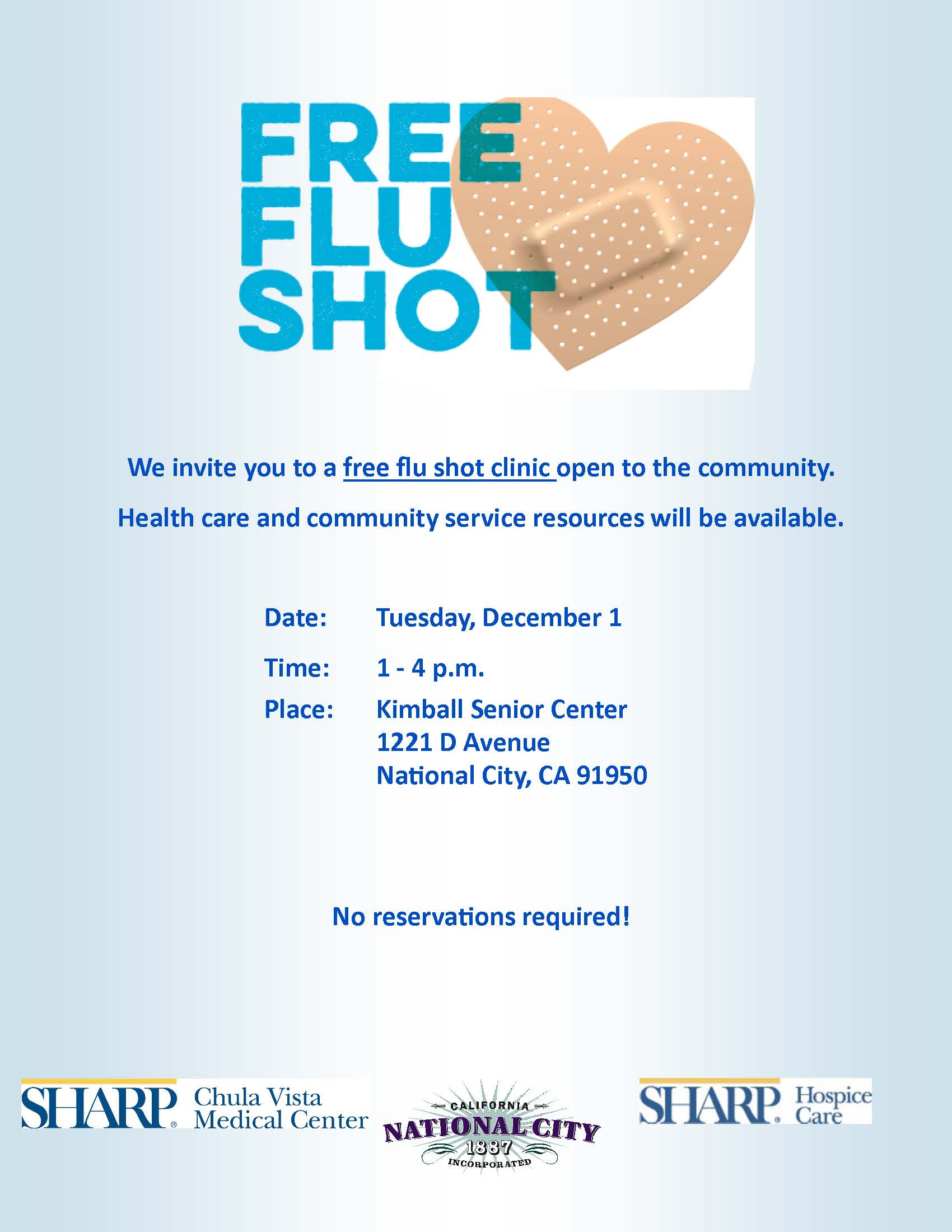 The library will be closed for repairs and renovation from December 19th through January 6th.

“The work being done in the Library will protect an asset that means a great deal to our community” added Leslie Deese.

The library will be closed starting Saturday December 19, 2015. It is expected to partially reopen on Wednesday, January 6, 2016 for literacy and computer center services, only. The Library is expected to fully reopen on January 17, 2016. Books and other materials checked out just prior to the closure will not be due until after January 18, 2016 and no fines will accrue. 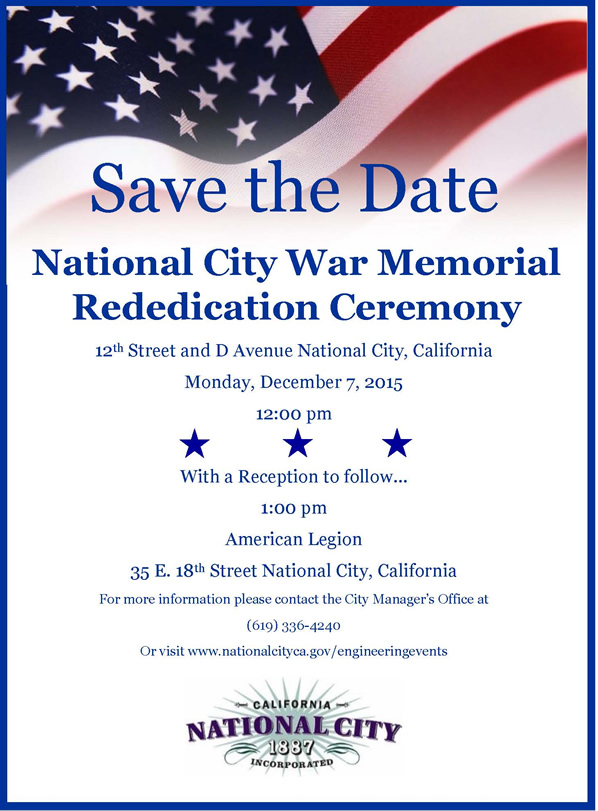 In March 2014, three bronze plaques were stolen from the War Memorial. The plaques,on display for over 60 years, were dedicated to National City servicemen who diedserving our Country during World War II, Korean, and Vietnam wars. Following the theft,there was an immediate outpouring of concern and support. Intense media coveragebrought the community together. Veteran groups, elected officials, residents, andbusinesses, rallied to raise money to replace the stolen plaques.

Days later, a Good Samaritan contacted National City Police stating he’d found theplaques in San Ysidro. With the plaques safely returned, the City Council immediatelydiscussed how to safeguard them. A committee was established, whose purpose was toensure safety of the plaques and incorporate the War Memorial into the $1.5 million DAvenue community corridor project.

The plaques are now restored to their original state. The War Memorial, now clad ingranite and repainted, lives on as a tribute to our fallen heroes.

Other improvements to the Memorial include new concrete seat walls, improvedlandscaping, new flag poles, new public safety cameras, street and decorative lighting,and new sidewalks. An existing wall surrounding the War Memorial has beendesignated a Veteran’s Wall of Honor, allowing for the community to purchase tiles inhonor of military veterans. Mosaic benches built by ARTS – A Reason to Survive, payfurther tribute to our military men and women. The four legs of the intersection havebeen improved and a roundabout constructed to include a pentagon dedicated to the fivearmed branches of the United States Military.

National City’s War Memorial ensures that our fallen heroes will forever be rememberednot only for their service to our Country, but for their roles in families and theircommunity. For generations to come, visitors to the War Memorial will be inspired bythe heroism and devotion to duty, and will be filled with a sense of pride in theircommunity.

We look forward to seeing you on December 7th! 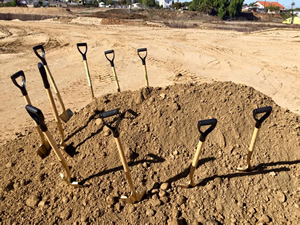 “With this project, the City is continuing the long process of reversing a history of incompatible uses and underutilization of key sites on the west side of National City. We are also setting a benchmark for smarter development in National City, linking residents and businesses to multiple forms of transit that promote sustainability and furthers economic opportunity,” said National City Mayor Ron Morrison at the event.

“This new transit-oriented community will enhance National City by providing high quality, affordable housing for qualified residents,” said Related Chairman and Chief Executive Officer Bill Witte. “This development is made possible by the efforts of our committed community partners. I would especially like to recognize the City and Environmental Health Coalition, who were instrumental in gathering community support during the early phases of this development.”

Located in the vicinity of the 24th Street Transit Center, the first phase of Paradise Creek will contain an initial 109 family homes available to qualified residents in the surrounding area, two residential buildings, outdoor amenities such as pedestrian walks, picnic areas, structured and natural play areas, a significant open ‘Village Green’, intimate plazas, a 6,000 square foot ‘Commons’ building containing both management and social services to serve the needs of the residents along with a fitness area, learning/computer center, conference rooms, multipurpose room, and outdoor terrace and sitting areas.

Paradise Creek’s landscaping will complement the building architecture, consistent with the intent of the Westside Neighborhood Specific Plan and respectful of the surrounding community. Paradise Creek will additionally include street and boundary landscaping to create a compatible and consistent neighborhood street scene and appropriate and visually appealing buffers to adjacent properties.

“Working collaboratively with the City and community partners, we have planned this affordable rental community that will revitalize the neighborhood, serve as a model of sustainable transit-oriented smart growth, and expand the employment base in National City," said Sue Reynolds, President and CEO of Community HousingWorks. "Further, our on-site, after school programs and coaching will empower residents to create financial sustainability, move up in the world, and achieve next-generation success.”

The first phase of Paradise Creek is expected to be completed in November 2016. More information is available at www.paradisecreekliving.com

For the second year, National City has been ranked the #1 on the Regional Walk Scorecard from Circulate San Diego.

"National City emerged as the top scoring city for several reasons. The city continues to vigorously add pedestrian-friendly infrastructure - especially near schools and civic buildings. The city comprehensively plans for improvements, and provides robust education to students and families on safe walkability. National City has the highest pedestrian collision rate in the region but has consistently taken steps to improve safety. This city's work provides a model for other cities in the region." 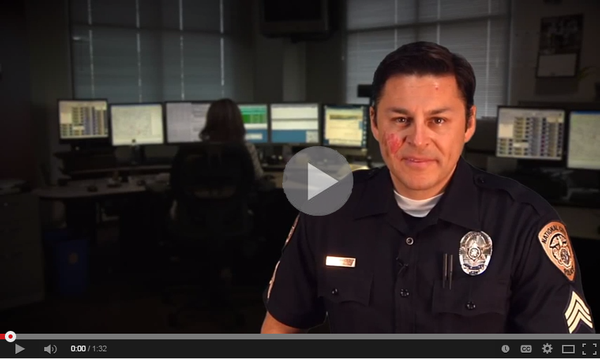 When most people think about the holidays, family festivities and good cheer likely come to mind. What few of us consider is that the holidays also present an increased risk of home fires. Home fires during the holiday season often involve cooking, Christmas trees, candles and holiday decorations.

By taking some preventative steps and following simple rules of thumb, most home fires can be prevented during the holidays and beyond.


Free viewers are required for some of the attached documents.
They can be downloaded by clicking on the icons below.