Often characterized by its rich historic past, National City is in fact the second oldest city in San Diego County. Incorporated on September 17, 1887, National City was originally part of the 26,000-acre El Rancho de la Nacion, which was purchased in 1868 by Frank Kimball and his brothers Warren and Levi. The Kimballs cleared lands, built roads, constructed the City's first wharf and brought the railroad to the City.

The Kimball’s and other early visionary leaders of National City are embodied in the historical buildings and landscape dotted throughout the City. The historic buildings are evidence of the rich past which contributes to the cultural fabric of National City today. Such historical resources provide continuity with our past and enhance our quality of life.

In order to recognize those properties that have historical significance the City Council has the option of placing additional properties on the List of Historical Sites in National City.  The property owner then may request a Mills Act Contract to reduce property taxes in exchange for ongoing maintenance and improvements of a property on the historic sites list.  For additional information on the Mills Act, please contact the Planning & Building Department at (619) 336-4310. 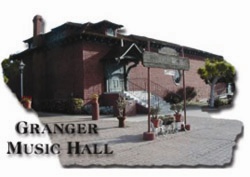 Granger Music Hall, 1615 East 4th Street
Ralph Granger, who struck it rich in the silver mines of Colorado and was making $5,000 a day through the 1890's, located his family on an estate in Paradise Valley (8th Street).His love of violins led to his purchase of a large and expensive string collection, which prompted him to hire San Diego architect Irving Gill to build a private music hall for him near his house.

A wonderful 75-foot mural adorns the recital hall ceiling portraying the Muses Euterpe and Erato, surrounded by cherubs. Due to the way the building was constructed, no wall is exactly parallel, so a microphone is not needed. Sound travels from one end of the hall to the other without distortion.
Saved from demolition, Granger Music Hall was moved to its present site. In an effort spearheaded by National City Historical Society, it was lovingly restored by the citizens of National City. Painted its original colors, it is now listed on the National Register of Historic Places.

Brick Row on Heritage Square, 909 A Avenue Designed by San Diego architect R. C. Ball (who designed Folsom Prison), it was constructed by Frank Kimball in 1887 for $30,000.These 10 individual row houses were to be used by the executives of the Santa Fe Railroad. This architectural style is unique to this region and was molded after the row houses of Philadelphia and similar eastern cities. It was hoped that the railroad VIPs would not only feel at home surrounded by familiar architecture, but also be impressed by the cosmopolitan appearance of the young city. All the apartments have a formal dining room with fireplace, a kitchen, a parlor with fireplace, a butler's pantry, and four bedrooms upstairs

Twelve-inch thick interlocking brick walls divide the units. The brickwork on the row houses was laid with an artistic eye to break the severe lines of the long walls. The bricks above the second story are set upright at an angle. A one-story wooden porch runs the length of the building.

Listed on the National Register of Historic Places, it now is an integral part of National City's Heritage Square. Each of the 10 units is privately owned and maintained; however, there is a protective covenant on the facade, so the exterior will always be in keeping with the Victorian surroundings. 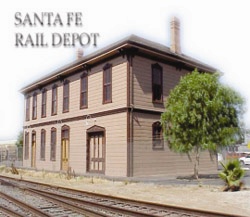 Santa Fe Rail Depot, 922 West 23rd Street
(California Southern Terminus Depot)
Built in 1882, the Santa Fe Rail Depot is the only original transcontinental railroad terminus in the United States that is still standing. On November 14, 1885, the first train left from National City to Waterman (renamed Barstow in 1886), 78 miles from its transcontinental link in San Bernadino.

The restored Santa Fe Rail Depot serves as a railroad museum and community meeting place. Nearby on 24th Street, a restored National City & Otay Railway coach will be installed in a park site.  For more information please visit www.sdera.org or call (619) 474-4400 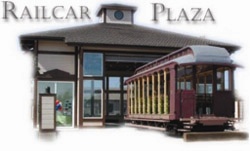 The Original 1887 No. 1 Car of the old "MOTOR CANNON BALL" excursion train is now on display at the National City Railcar Museum. 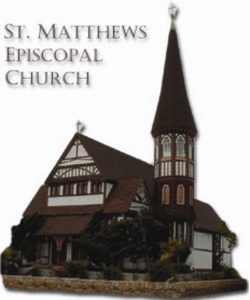 St. Matthews Episcopal Church, 521 E. 8th Street
In 1872, the Kimball brothers donated a parcel of land for the future building of a church. The Episcopal Society was organized in 1882 and Frank Kimball was elected secretary. St. Matthews Church was built five years later. Designed by Chula Vista architect William Herman, it was patterned after an English Countryside church.

Free viewers are required for some of the attached documents.
They can be downloaded by clicking on the icons below.