The Spanish Land Grant, El Rancho de la Nacion, was purchased by Frank, Warren and Levi Kimball in 1868. The Kimball brothers cleared the lands, built roads, constructed the City’s first wharf and brought the railroad to the City. They successfully advertised National City as the most healthful climate on earth. Soon tree-lined streets connected graceful Victorian homes, and orchards flourished over rolling hills.

National City, San Diego County’s second oldest city, is truly “In the center of it all:” a thriving bi-national region of 5 million consumers. The City’s competitive edge is its central location, transportation network, and business industry. National City is 10 minutes from everywhere and positioned for prosperity, with proximity to the San Diego Bay, US-Mexico border, downtown San Diego, international airport, rail, San Diego State University, and other colleges and universities.

National City is circled by interstates 5 and 805, and highways 54 and 15. The San Diego Trolley and the Metropolitan Transit System (MTS) service National City 7 days a week. These transportation resources conveniently connect the City to the region. 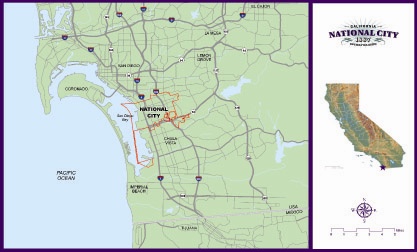 National City is home to over 3,000 businesses – a remarkable number for a city with a population of 61,115. As one of the healthiest business climates in Southern California, National City businesses come from various industries and sectors. Business types range from small family-owned operations to multi million dollar corporations. National City also boasts the highest sales tax per capita in the County. 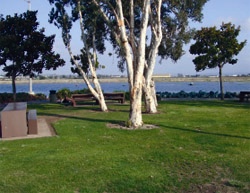 The National City Marine Terminal, part of the Unified Port of San Diego, is the most advanced vehicle import and export facility on the West Coast, processing more than 270,000 vehicles annually. Lumber is also imported from the Pacific Northwest for construction use throughout the region. National City’s port area extends three miles along San Diego Bay and is part of the largest U.S. Navy installation on the West Coast.

Dining. If you’re in the mood for Mexican, Japanese or a good old fashion cheese burger, National City has it all. The National City restaurant scene has over 200 restaurants to choose from, running the full range from affordable fast food, to interesting ethnic restaurants, to fine dining.

Historical Sightseeing. National City’s Victorian heritage is one of its more important assets. Visit one of the four buildings in the City that are listed in the National Register of Historic Places: Granger Music Hall, Brick Row on Heritage Square, St. Matthews Episcopal Church, and the Santa Fe Rail Depot.

National City is a general law city and operates under the council-manager form of government. The City Council has five members who are elected at large for a term of four years. The citizens of National City also elect the City Treasurer and the City Clerk.

The City Council is responsible for setting policies, enacting ordinances, adopting the budget, reviewing the General Plan, appointing committees and appointing the City Manager. The city Manager is responsible for carrying out policies and ordinances of the City Council, appointing city Department heads and overseeing the day-to-day operations of the City. The City Manager also serves as executive director and secretary of the Community Development Commission of the City of National City and may delegate that authority.

Location: National City is bordered by San Diego to the north and east, Chula Vista to the south, the unincorporated areas of Lincoln Acres and Bonita to the south and southeast, and San Diego Bay to the west.

Interstate Freeways: I-5 and I-805 cross the City from north to south, and State Route 54 traverses the southern edge of town