In March 2014, three bronze plaques were stolen from the War Memorial. The plaques,
on display for over 60 years, were dedicated to National City servicemen who died
serving our Country during World War II, Korean, and Vietnam wars. Following the theft,
there was an immediate outpouring of concern and support. Intense media coverage
brought the community together. Veteran groups, elected officials, residents, and
businesses, rallied to raise money to replace the stolen plaques.

Days later, a Good Samaritan contacted National City Police stating he’d found the
plaques in San Ysidro. With the plaques safely returned, the City Council immediately
discussed how to safeguard them. A committee was established, whose purpose was to
ensure safety of the plaques and incorporate the War Memorial into the $1.5 million D
Avenue community corridor project.

The plaques are now restored to their original state. The War Memorial, now clad in
granite and repainted, lives on as a tribute to our fallen heroes.

Other improvements to the Memorial include new concrete seat walls, improved
landscaping, new flag poles, new public safety cameras, street and decorative lighting,
and new sidewalks. An existing wall surrounding the War Memorial has been
designated a Veteran’s Wall of Honor, allowing for the community to purchase tiles in
honor of military veterans. Mosaic benches built by ARTS – A Reason to Survive, pay
further tribute to our military men and women. The four legs of the intersection have
been improved and a roundabout constructed to include a pentagon dedicated to the five
armed branches of the United States Military.

National City’s War Memorial ensures that our fallen heroes will forever be remembered
not only for their service to our Country, but for their roles in families and their
community. For generations to come, visitors to the War Memorial will be inspired by
the heroism and devotion to duty, and will be filled with a sense of pride in their
community. 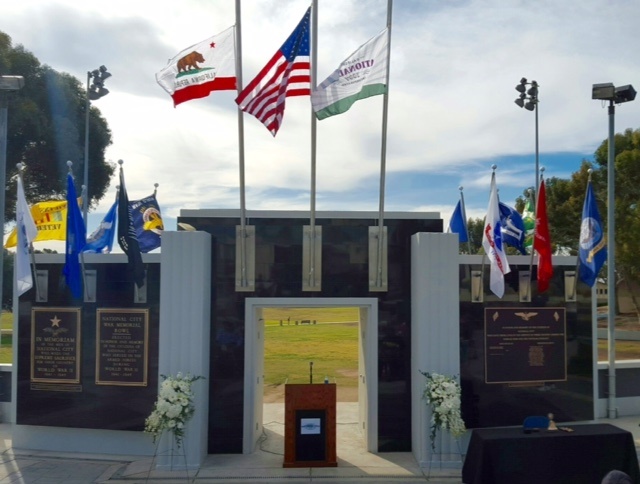 An existing wall surrounding the War Memorial has been designated a Veteran’s Wall of Honor, allowing for the community to purchase tiles in honor of military veterans.

For more information please contact Lauren Maxilom in the City Manager’s Office at (619) 336-4289 or LMaxilom@nationalcityca.gov

Free viewers are required for some of the attached documents.
They can be downloaded by clicking on the icons below.